I’ve been reading Elliptic Tales, a fantastic book on elliptic curves by Avner Ash and Robert Gross, and I’d like to summarize what I’ve learned from the book in three long-ish posts corresponding to the three parts of the book. This post is the first one in this series.

is 6, because the monomial with the largest degree, i.e.

, has degree 6. The second notion of degree is purely geometric: informally, we want to say that the geometric degree of a curve described by a polynomial equation

. Of course, the problem is that this is not well-defined, because the number of intersection points depends on the line

we pick! Consider the figure below (adapted from Figure 1.6 in the book): 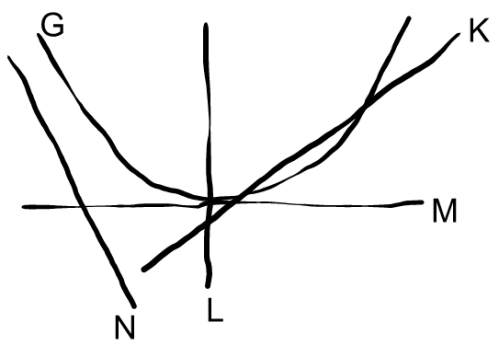 at two points, the lines

at one point only and the line

. But instead we’re going to be bold and demand that the geometric degree of a curve to be the same regardless of the line

we choose! It turns out that this can be done and is the source of a lot of rich, beautiful and exciting mathematics. But, enforcing this demand will require us to reconsider which number system to adopt, and to carefully redefine what we mean by an “intersection point” and how to count them.

It turns out that we need to do three things: 1) define our polynomials over an algebraically closed field of numbers; 2) switch from the Euclidean plane to the projective plane; 3) count intersection points by their “multiplicities”. I will now explain what each of these means.

has a root in

. We can see immediately that the reals

is not algebraically closed, since e.g. the polynomial

has no roots in

. However, the fundamental theorem of algebra tells us that the complex numbers

won’t do for us: we want to say that algebraically

has degree 2, but geometrically

does not even make sense in

2) In the projective plane, we describe points by three coordinates instead of the usual two:

gives us the usual (“finite”) plane. Points with

correspond to “points at infinity”. The coordinates

describe the same point. So, the points at infinity form a single line at infinity that can be parametrized by

can be any real number.

, this means multiplying each monomial in

by an appropriate power of

so that all monomials have the same degree

. For example, the homogenization of

. Now, to find out which points at infinity get attached to the curve described by the polynomial equation

to which the solutions are

. By the property above, these describe a single point which we might as well denote by

Why do we need this homogenization of polynomials and these points at infinity? Intuitively, it is to deal with cases such as the line

in the figure above, which intersects the parabola at a single point, whereas we desire every line to intersect the parabola at exactly two points. The second intersection point turns out to be a point at infinity: namely

. This point at infinity belongs to both

and the parabola, as you can easily check.

3) Finally, we have to count intersection points by their multiplicity. Suppose a given curve

intersect at a point

. Suppose further that the line is parametrized by the parameter

is a root of the polynomial

obtained by plugging the parametric form of

in the polynomial describing

. If the degree of this root is

, we say that the intersection point has multiplicity

and express it by

. This definition was a mouthful, so let’s do an example: suppose our curve is defined by the polynomial

. If we plug these in

, so we say that the intersection point corresponding to

When can the multiplicity of an intersection point be larger than

is defined to be

), without having to worry about whether the standard analytic definition in terms of limits even makes sense in a given field. Ditto for partial derivatives.

It is again clear why we need to count intersection points by their multiplicity: it is to deal with cases such as the line

in the above figure: this line is tangent to the parabola, hence intersects it at a single point only, but the intersection has multiplicity

, as you can easily check.

We are now ready to state Bézout’s theorem which is the culmination of our desire to make the algebraic degree and the geometric degree of polynomial equations or curves to always match each other. Suppose

are two projective curves that intersect at a finite number of points:

. Then Bézout’s theorem states that the product of the degrees of the homogeneous polynomials defining

exactly matches what we call the global intersection multiplicity

, i.e. the sum of the multiplicities of all intersection points. The fact that any line intersects a curve

are immediate consequences of Bézout’s theorem.